A Handful of  Women

A Handful of Women 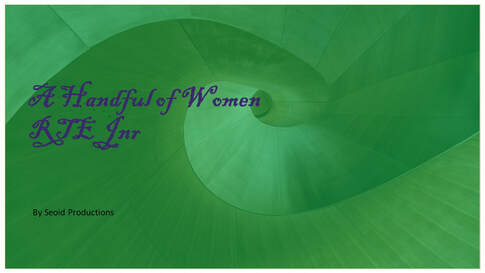 Highlighted by the BAI as one of the ‘notable projects’  supported in their 2019 Sound & Vision funding
This is a three part historical documentary/drama aimed at children aged 8 to 12 years. Embark on a thrilling journey of discovery with ‘young Peg’ through the campaign for women’s suffrage in Ireland. Prepare to be captivated by Great Gran’s stories of ‘invisible’ women as she awakens a message of empowerment for all young people.

Through Great Gran Peg’s box of memories, we are transported back to Ireland of the early 1900’s. We are immersed in the world of Peggy as a young girl and her friend, Frankie who she nicknames ‘the local Gazette’. He fills her in on all of the news from the wider world beyond their village. Peggy, having lost her mother, turns to some of the women around her for “all the stuff that other girls learn from their Ma’s”. From news of Irish suffragists throwing potatoes in London, confetti in Dublin and to others breaking windows and being imprisoned, nothing goes unnoticed as Peggy carves her path under the shadow of some major historical moments in the campaign for women’s rights. Her everyday dramas are interspersed with authentic snippets of news, quotes from suffragists, politicians and some adverts and slogans of the period. ​
It is nice to share some of where the inspiration came from for the final characters in the drama. Our feisty character, Miss Rogers was inspired by an article I read in the Holly Bough in 2018 based on one of our Cork suffragists, Laura Geraldine Lennox. It is very much at the core of my research and writing, not to go for the most well-known historical figures but instead to showcase some of the ordinary women of the period, and to remind ourselves of how the most 'ordinary' women are indeed 'extraordinary'.
A Handful of Women