Hearing a pin drop, feeling a lump in my throat, laughing until my belly aches, experiencing a moment of clarity, having no answer to that burning question, living in the moment, sharing it with strangers, walking in through one set of doors, leaving from another….I always loved the experience of going to see a play. In 2017 I took what seemed like a natural step for me. I moved on from being a theatre goer to becoming a theatre maker. I had spent years developing my craft as a poetry performer, had written and produced several successful radio drama and, throughout, had met some brilliant people who worked in the world of theatre. And on top of that I had an idea!!

The subject matter for this bilingual multi-media drama production, Fear an Rothair, was inspired by a radio documentary/drama which I wrote and produced for RTE Jnr and which included a reference to Fear an Rothair, The Bicycle Men who travelled around Ireland over 100 years ago teaching Irish. Bhí fonn orainn scéalta Fear an Rothair a chur amach i nGaeilge agus i mBéarla do dhaoine fásta chun spéis a spreagadh san teanga agus san oidhreachta. We explored the stories of these bicycle men, presented them in both Irish and English providing a creative voice for the Irish language community whilst  also inspiring a wider audience to engage in the Irish language and it's heritage. I drew on the writings of the late Peadar Ó hAnnracháin, le caoinchead ón a chlann, from Michael Cronin's An Ghaeilge san Aois Nua, le cead ó Cois Life. Táim buíoch de Bhlánaid Uí Chatháin agus Chuan  Ó Seireadáin, Coimeadaí le Conradh na Gaeilge for their support in my research for this project. The bilingual aspect of the project along with the theme of transmission of language down through the generations engaged a wide interest from Irish language communities and beyond. The project also opened up  the doors of the Goldie Chapel at Nano Nagle Place, Cork to a wider audience, being the first theatre production held at this intimate venue which has strong links to education and heritage. ​​​www.nanonagleplace.ie

Path through the Dark. The Story of Nano Nagle
Ocean of Notions Theatre Company production 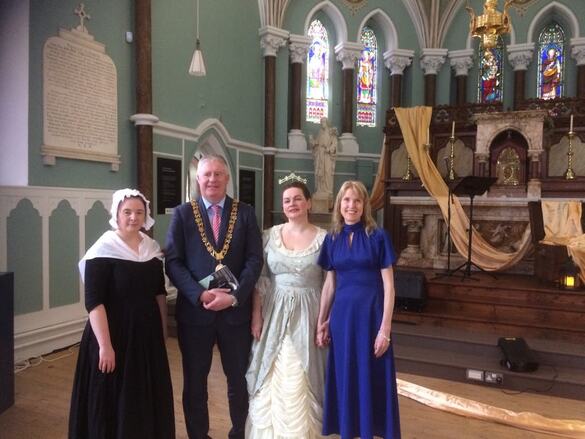 Co-Writer/Director: Judie Chalmers
Co-Writer/Producer: Ann Dalton
Sound design: Shane O’Sullivan
Actor: Judie Chalmers
Vocalist: Annette Buckley
Additional Composition: Simon McHale
First performed: April 2019
Venue: Goldie Chapel, Nano Nagle place
Funded by: The Arts Council Artist in Community Scheme and Presentation Sisters SW Unit
I was delighted to be invited by Ocean of Notions Theatre Company to co-write and produce this evocative drama on the life of Nano Nagle. This piece reveals the spirit of Nano, her fire, what drove her in the face of adversity and great danger during Penal times in Ireland. Hers is a story of hope and empowerment, inspiring us all to take little steps and make big changes!
Further performances to come in 2020.. More info: www.oceanofnotions.ie