﻿What about the Children 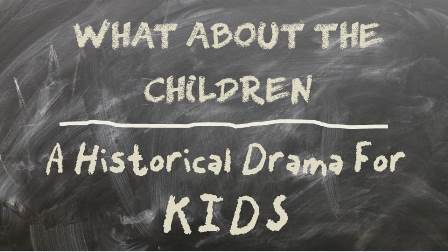 What about the Children

This is a three part documentary/drama aimed at children aged 8 to 12 years. Ann has drawn on an experienced and talented director and cast, to bring this story to life. This drama explores the voices of children from a period in Irish history when their voices largely went unheard. Much of what children experienced and felt at the time is undocumented and this docu/drama exposes the children of today to some of the daily experiences of children from over 100 years ago.

Where to begin….Katie and her Great Gran Peg tune in to a current report of war in Syria. Katie, scared by the image portrayed reaches out to her Great Gran who in turn draws us back to a time in Irish history, when she too, as a young girl, was scared. Through Great Gran Peg’s box of memories, we are transported back to Ireland of 1916. We are immersed in the world of Peggy as a young girl and her friend, Frankie. The largely unheard voices of children in rural Ireland from that period are brought to life through Peggy and Frankie. We share their stories and observations of family life, school, their wider community, as well as local and international news. From news of deported children to the banning of children wearing political badges in school, nothing goes unnoticed as Peggy and Frankie journey together under the shadow of some major historical moments. Their everyday dramas will be interspersed with authentic snippets of news and adverts of products, some of which are still available today such as Chiver’s Jelly and Horlicks!

Ann has worked on this and several other radio drama productions with the brilliant director, Judie Chalmers.  Ann and Judie have worked together on several other radio drama productions (The Lonely Flower, The Adventures of the Stripy Pyjamas and Starboy for RTE Jnr and an adaptation of The Christmas Carol by Charles Dickens, for Cork City Community Radio).  The multi-talented cast includes Dominic Moore, Paschal Scott, Antoinette Hilliard, Fionula Linehan, Darragh Keating and child actors Mia Jones, Fiachra O’Drischoll, Caoimhe Hickey Barry and Shahla Aslam.  The production was edited by Rupert MacCarthy Morrogh with Brian Nammock on sound.

View an extract from the script. ​

​What about the Children Audio Drama Workshops

Ann has developed and delivered audio drama workshops for primary school children at festivals, schools and libraries. Most recently, Ann delivered workshops based on What about the Children as part of the Children's Book Festival in Cork. This particular workshop explores the format of documentary/drama in a fun and interactive way.

​​By introducing children to the world of audio drama and documentary, they are given an opportunity to improve their listening skills, and to enhance the development of their imagination, without the constant reliance on visual stimulation.

What about the Children - Audio Extract